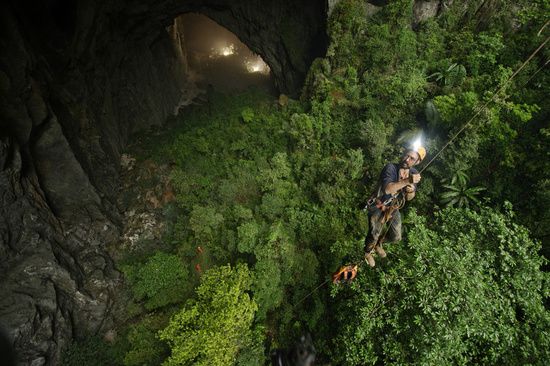 Son Doong Cave – coordinates 17°27’25.88″North 106°17’15.36″East, in Son Trach commune, Bo Trach district, Quang Binh province– is the largest natural cave in the world. This cave is located in the Phong Nha – Ke Bang cave complex. The cave is part of an underground system that connects to more than 150 other caves in Vietnam located near the border with Laos. Son Doong Cave is considered as a picture of “monumental, amazingly beautiful” with many stalactites with strange shapes, the most special thing is that there is a primeval forest growing in the cave. Geoscientists in the world consider Son Doong to be the most magnificent cave in the world.

Son Doong Cave was discovered in 1991 when Ho Khanh, a local resident, found it by accident while hiding at the mouth of the cave to avoid the rain. After some time until 2006, when the British Royal Cave Association expedition came to this area to explore, Ho Khanh informed them. It was very difficult for him to find the cave entrance, which was located deep in the old forest with rather difficult terrain, far from the main road and could not be detected on Google Earth and he himself named this cave.

With the event on April 4, 2009, after finding and discovering Son Doong cave, the British Royal Expedition shocked the world. The discovery of Son Doong cave is likened to finding the top of Mount Everest underground. Dr. Howard Limbert has just announced a new cave in Vietnam, Son Doong cave, which the expedition claims is the largest in the world, many major foreign newspapers such as Daily Mail, Telegraph, The Sun, Breitbart, etc. Newser… simultaneously posted about Son Doong cave. The British Royal Expedition also gave Ho Khanh the honor to name this cave. The Daily Mail ran a big headline on the front page “British explorers found light at the end of the tunnel… in the world’s largest cave”, and the Telegraph recognized the contributions of Ho Khanh – the guide for the The expedition entered the Doong area to discover Son Doong cave.

In Son Doong cave, the largest cave is more than 6 km long, 150 m high and 200 m wide. Thanks to that, Son Doong surpassed Deer Cave, Gunnung Mulu National Park in Malaysia to become the largest cave in the world. This cave has a beautiful stalactite system with images of the “garden of paradise” in the cave, or a collection of “pearls” thousands of years old. And it was the discovery, discovery and publication of Son Doong cave that made the Phong Nha – Ke Bang cave area become the world’s illustrious cave kingdom. 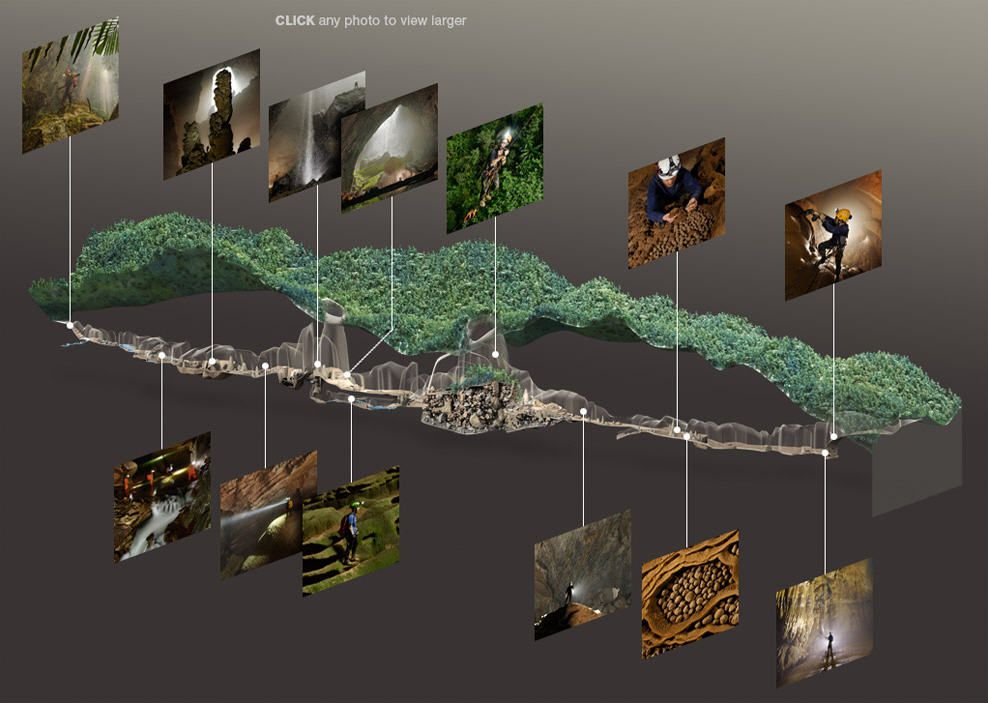 Entrance to Son Doong Cave: “Although these are extremely large caves, they are almost invisible until you are right in front of them,” commented one explorer. Hunters discovered them when they saw the wind blowing from the underground caves. If you are a photography enthusiast, then this is great. 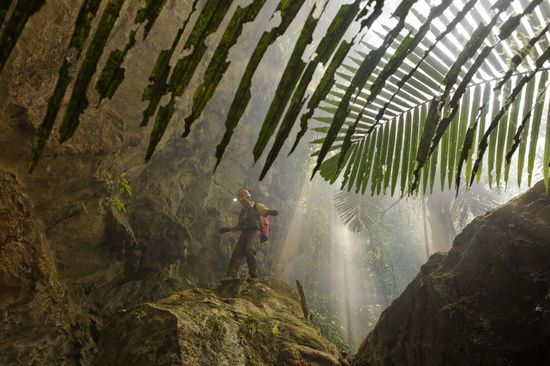 The road from the entrance to the cave has a steep slope, it is very difficult to go down and you have to go along a fast-flowing underground river to get into the cave.

The cave section has a width of about 92m, with this nearly 244m wide arch in Son Doong can accommodate a 40-storey building in New York, USA. The structures here are larger and more majestic than any human imagination. The widest place of Son Doong cave was presented by Mr. Howard Limbert that three large planes can fly together comfortably. 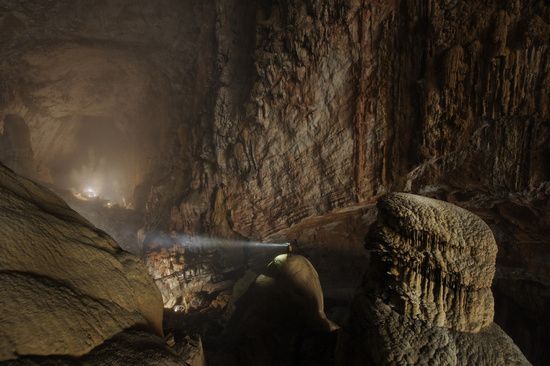 Son Doong Cave was formed about 2-5 million years ago, when river water flowed through the limestone area that had been buried along a fault line. The water eroded and scraped a huge tunnel in the ground under the mountain range. In places where the rock is soft, the ceiling collapses to form holes, long into a giant cave arch. Huge, clear and deep “pool” in the cave 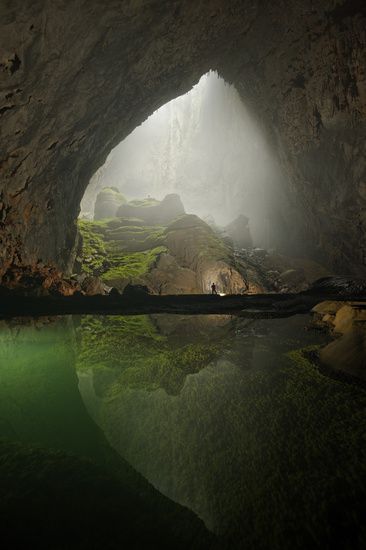 The waterfall in Son Doong cave was discovered through a “death crater”. 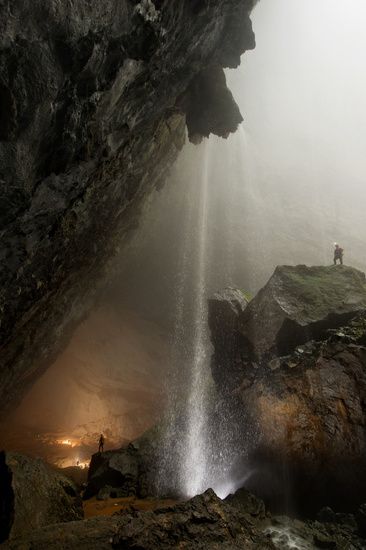 And here are the ribs – the perfect sculpture of nature in Son Doong. 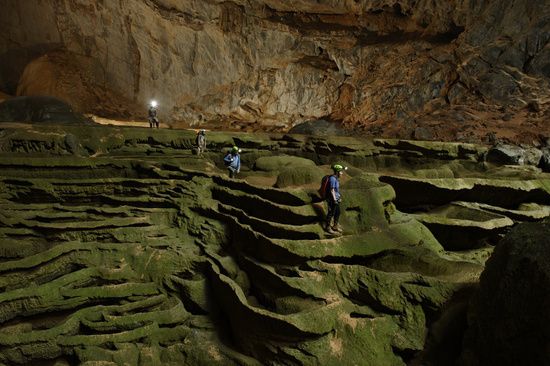 A section of the roof of Son Doong cave collapsed many years ago, creating conditions for light to come in, luxuriant trees to grow, creating a magnificent forest in the heart of the cave. The explorers named this place the Garden of Eden. The Garden of Eden has a very large area, including many plants, immense water surrounded by clusters of forest trees and plants of all kinds, ecosystems. diversity of the tropics, especially the crisscrossing vines on the rocks.

This is an ideal place for many species of plants and natural creatures. Somewhere you will hear birds chirping under the forest, the sound of water flowing by the ravine is impressive and majestic, a vast area. In the area of ​​the Garden of Eden, expedition scientists discovered three new species of millipedes, wood lice, and another crustacean. In the forest, there are nearly 400 species of plants, in which there are birds outside migrating to live very beautiful and fancy. 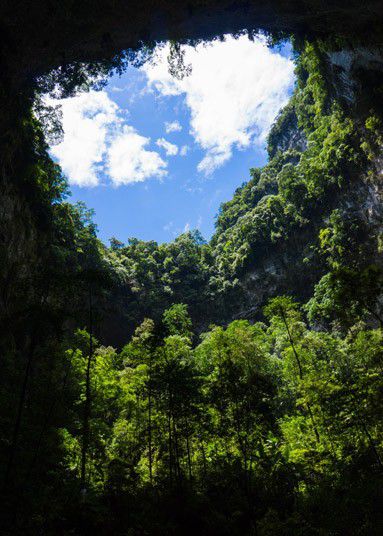 From the cave of Phong Nha – Ke Bang National Park, you can see the hills. The vestiges of the war are still imprinted over time, the bomb craters in that war have become fish ponds. The green fields, fertile lands, mountains and rivers, and fields make the landscape beautiful and attractive. It can also evoke a tranquil and peaceful countryside setting 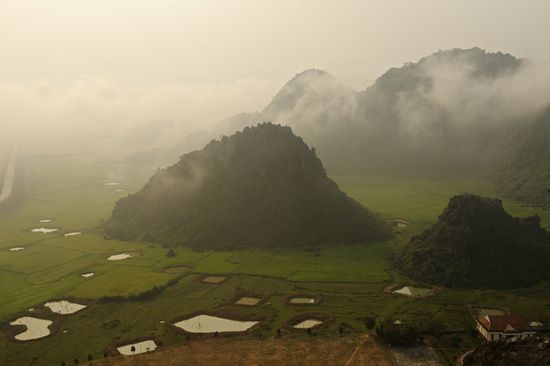 Wherever there is sunlight and wind, there is the green color of life in Son Doong cave, a completely different world from the naked, pitch-black darkness found in most other caves. 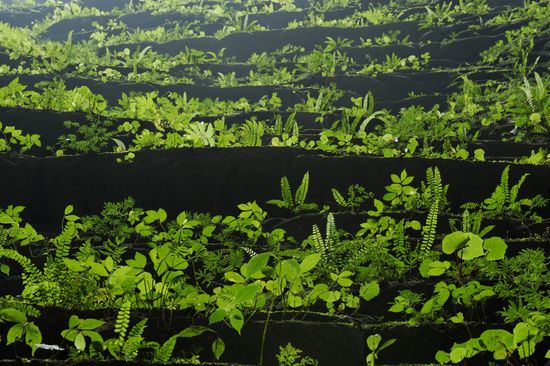 The pearl cave in the terrace lake is dried, the unbelievable beauty of the scene in Son Doong cave. Natural structure over thousands of years, calcium crystals have encased small grains of sand to form rare “pearls”. This priceless “Pearl Collection” is located near the Garden of Eden in Son Doong Cave. 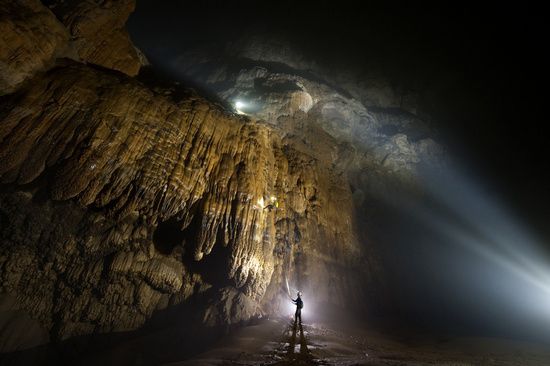 Come to Hang Son Doong, to explore the most wonderful cave in the world. You will be immersed in the pristine natural forests, birds chirping, murmuring streams, rustling winds of the World Natural Heritage Phong Nha – Ke Bang National Park combined with activities. such as camping, fishing, bathing in streams and observing langurs, visiting Doong village, a highland village, feeling the still very wild activities of the ethnic people in the heart of the heritage, enjoying the specialties of the people. The locals are really an interesting experience never to forget.
0Shares
PrevNext